One night I was playing guitar in front of the fire by candlelight. I put on a capo at the fifth fret to try playing a song in a different key, and halfway through the song I realised… hey…this sounds really different, and…I like it!… what’s going on?

I’d accidentally left the top E string out of the clamp of the capo, so it had remained open while the other strings were barred at the fifth fret. This discovery opened the door to a whole new universe of tunings and possibilities, and also unleashed an avalanche of creativity. I began to experiment with leaving out more strings, on different frets, and then had the idea of using 2 capos…

One day I wondered what it would be like to have the fifth, fourth, and third strings clamped in the middle of the fretboard, leaving the other strings open. I realised if I turned the capo over and fiddled around a bit with the rubber foot on the clamp that normally holds the long arm against the neck, turning it upside down, it would be just the right size. Bingo! I discovered what has become my favourite tuning.

Most of the capos I use are Kyser capos, the spring-clamping style. They actually sell small capos now, but I prefer my hand-made ones, cut and filed down until just right. I use about 8 different capos at last count, to block 2, 3, 4, 5, and 6 strings in different ways.

At the same time I was starting to tune my guitars lower, to suit my voice. A lot of the keys that are natural for guitarists to use, E A G etc. just didn’t suit my voice. I would have to strain to reach a note , or it was too low to get any power etc. The more recording I did, the more I realised that it was absolutely crucial to find the right key, and I would spend a lot of time before recording a song experimenting with keys. I began to tune my guitar down, from ordinary concert pitch or E to E tuning down to E flat, then D, and then C# – standard tuning,  just down 3 semitones.

The keys suited my guitar style and were right for my voice. I recently found a second-hand Walden baritone guitar that I tune B to B, and I’m loving it. My Taylor has gone back up to D to D, and it is definitely happier there.

The other interesting thing was, when I put on a capo or 2 in these new tunings with a low-tuned guitar, I had no idea what chords I was playing or what key I was in, and instead I just listened and found new chords by ear. It made me step out of my rudimentary knowledge of musical theory: keys and chord families etc, although I don’t read or write musical notation.

Each time I discovered a new tuning, it was like picking up a brand-new unknown instrument. This led to many new songs being written just as I found new chords. All my old habits and knowledge of progressions and which chords should go with which went out the window:  I just had to listen and experiment, a very creative receptivity. 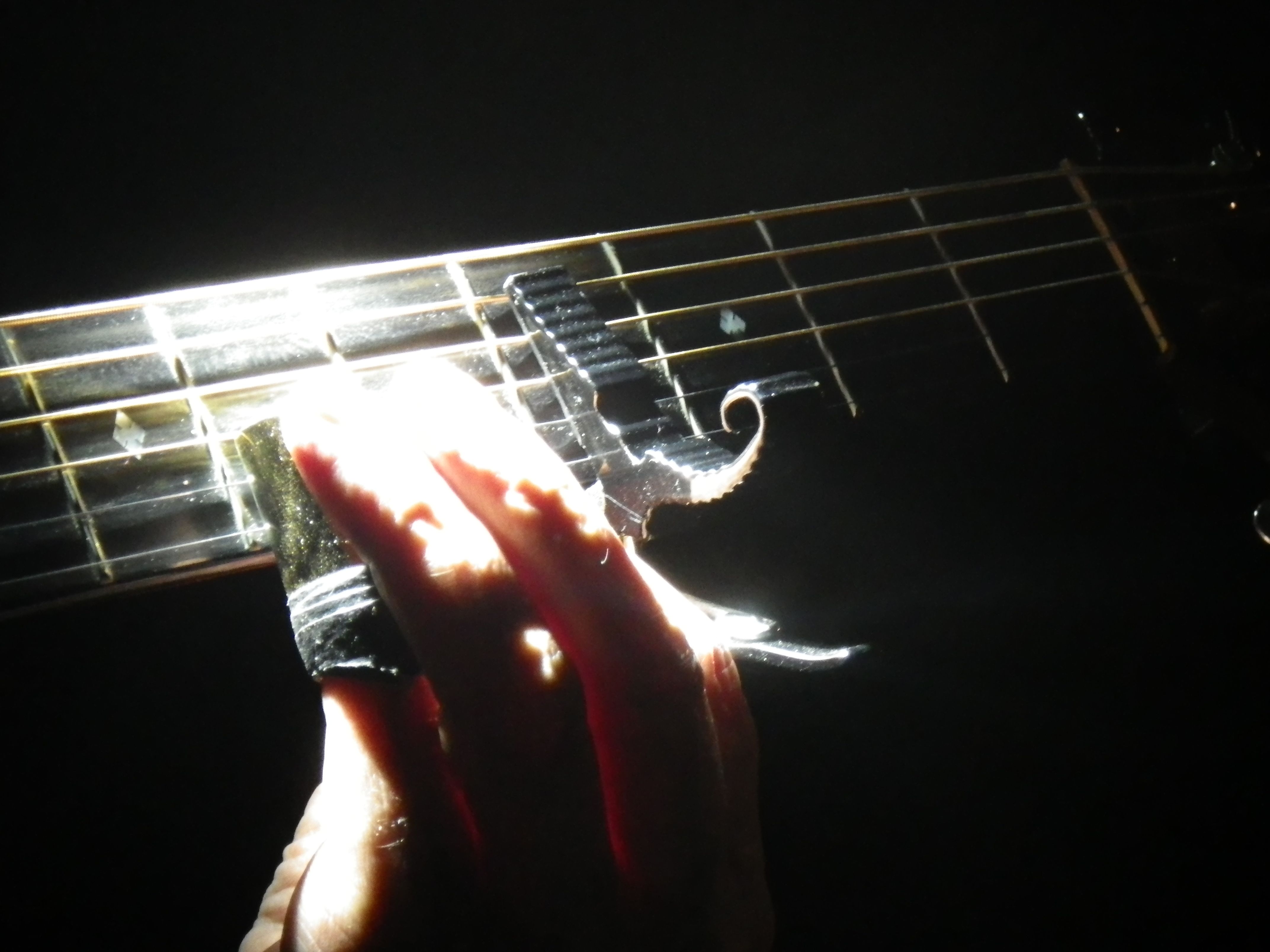 A year or two after that initial discovery I was using 20 or more different capo positions and combinations – I’ll call them tunings, even though I don’t re-tune the guitar – the guitar is tuned the standard way, although lower than concert pitch, as I described. I had to work out some way of keeping track of what songs I played in which tuning, and I came up with what I call the postcode method, a way of describing with a 2, 4, or even 6 digit number where and how many strings are clamped by 1, 2, or 3 capos of differing width on the neck.

You can see some of the results on my videos. The song Spread the Light has a capo on the 2nd fret across all the strings, and another on the 6th fret just on the fifth fourth and third strings, thus 2663 – 2nd fret 6 strings 6th fret 3 strings.

some of the gear that I use includes…

Taylor 514ce guitar, a beautiful instrument. I have installed a Dean Markley acoustic guitar pickup in the sound hole, but set up running lengthways  so it is mainly picking up the top 2 strings. I process this pickup separately for a slide sound, usually compressed and driven, with a long delay.  I use DAddario phosphor bronze EJ16 strings on this guitar.

Walden baritone, haven’t had it long but loving it. Using John Pearse baritone strings that are expensive but seem to last twice as long, so worth the outlay and sound great. Really solid thick strings that stand up to the thumping and slapping I give them to get great big low notes from the bottom B string. I’m also using an AddString, an extra string an octave above the string on the 3rd, so it’s a 7 string baritone. Gives it a little more high end sparkle. Love that sound!

A Yamaha THR C 10 watt stereo amp. Another new thing that has become part of my sound. Astonishingly good effects and programmable sounds, transportable in a small roadcase and sounds great miked up.

I mix the sound the saddle pickup from the guitars, through some EQ, with the amp  sound, adding the slide sound as required through a Digitech FX and volume pedal. Sometimes I mic the guitar up as well. I use a lot of tremolo and a Rockslide for playing slide, a really great slide.